The true New Yorker secretly believes that people living anywhere else have to be, in some sense, kidding.

I feel the same way about people who say they love kale.

How our dads did midlife crisis:

How I would do midlife crisis:

How TH does midlife crisis:

Tell me, how would you do midlife crisis?

So there’s a saying, “You should do one thing every day that scares you.”

I think, as a parent, waking up and getting out of bed qualifies.

Last year on the mother of all days, I found out I was pregnant with 3.0. Pretty good way to spend Mother’s Day…freaked out about downloading a 3rd version of the TH/BRW program. But now I get the joy of celebrating with the little love that she is. However, Mother’s day proposes some issues for me (What? No way!).

First, TH asked what I wanted to do for Mother’s Day. I explained that it’s a tough day because if they spend the whole day doing everything I want, letting me sleep in, breakfast in bed, Starbucks in bed, lunch in bed, Starbucks round 2 in bath, dinner in bed, then they are just giving me a taste of the good life…a utopia surely never to exist. So he responded, “Ok, we’ll just leave you alone, grumpy.” Yes! Leave me the fuck alone…now THAT’S a day in honor of a mother. So I said, “That sounds great.” Then he realized his mistake: “No, no, I mean, we’ll just treat it like any other day if you don’t want us to make a big fuss and you’ll be a scrooge about it.” UGH! “Any other day” sounds TERRIBLE.

Second, cards. C’mon. Buying and then actually sending greeting cards is on top of my list of “Worst Errands Ever.” First of all, there are so many to sift through. If you are actually taking the time to get a card, you might as well get a good one, requiring you to look at every. single. card. The task is so annoying and time consuming that you end up only getting for the holiday/birthday at the time, when really, you should invest the whole day and get all cards for the year just to avoid having to go any other time to do it. I’ve caught on to at least buying more cards than I need so I have some leftovers for the next time I’m in a pinch. And yes, I even have this awesome little thing: 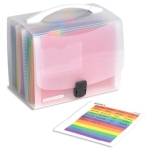 But you are so sick of being there after going through all the grandma, aunt, sister, mother in law, blah blah blah cards that you gotta get out of there asap.

Well, if this errand is daunting for me (aka someone who others would argue has “nothing to do all day”), I can’t imagine what it’s like for a spouse who works. Then again, when I got to Target to do this, I am usually with child(ren), increasing the likelihood of spending more money and time at the store while also listening to the background music of “I WANT THAT TOY, I REALLY WANTED THAT TOY….SCREEEEAAAAAAAMMMMMMMM. Oh that card makes music. I WANT THAT CARD, I WANT THAT CD! I WANT TO WATCH FROOOOOOZEEEEEEEEN!!!!!!!” So to help a brotha (aka TH) out, I decided to go ahead and get my own cards this year. But the only one I liked was a “from the dog” card (because it had a Westie on it).

So I got that and called it a day. TH signed it from our dog and my Mother’s Day greetings are complete. But now, I gotta still sign the cards for everyone else (and of course that means the kids have to sign their names…or at least I need to hold the pen in my non-dominant hand and sign their names for them), address, stamp and send the cards with enough time for them to get there Saturday; because how worthless was the whole task if they get there after the day!

But even I know getting a card in the mail amongst the annoying bills and junk brings a smile to anyone’s face. Especially when it’s in honor of being a parent. Sigh. And so it goes, as it will for every holiday and birthday hereinafter.

My response to the always appropriate question of “Are you nursing?”

“Of course! My husband insisted. But I’m formula feeding the baby.”